In the last month we've finished hay (YAH!), started calving, married off Matt (our hired man), had two litters of pigs, completed another Evergreen Sale, and I don't even know what else. And I seem to have been going through life without my camera (most of these pics were taken with my phone!). 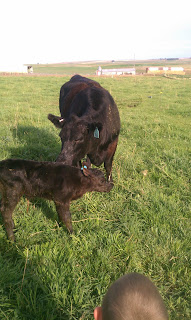 Trevor looks on as a heifer licks her new calf. We headed out - 3 adults, 3 kids and a clanking scales. She took it all in stride. Just the type of disposition we expect around here. I think last count we were at 8 calves and the first due date isn't here yet. Of course one calf had to be born in September. Which just means I can harass Jeff about calving during 3 months! 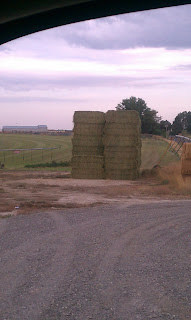 One of the last hay stacks of the year. The custom stacker was following Jeff around the field as he finished. They had the high schooler that worked for us this summer wash off hay equipment so they wouldn't be tempted to cut more. Unlike last year, we already have tons (literally) of regrowth. Now if we don't get snow before Thanksgiving so the cows can eat it! The seemingly constant rain we've had lately may also keep them from thinking about firing up a swather. 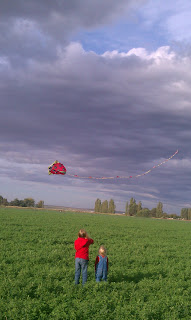 Molly & Lila flying a kite. A sure sign of fall in the basin; the return of wind. 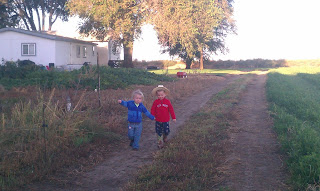 Our little sweeties holding hands on the way to the barn. They are nice to each other MOST of the time. Our house sure is different during the day while Molly is at school. 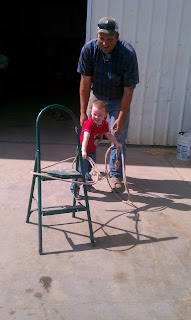 Jeff and Trev roping a ladder. That boy's going to be trouble - he already wants to go with dad all the time. If you bribe him with a trip with dad he remembers! He likes to remind you of your promise at about 5 AM - but he's so darn happy. Now if he only has so much energy and enthusiasm when he's old enough to accomplish things.
Congratulations to Matt & Kendra! They had a beautiful wedding - complete with a Molly flowergirl. Lila was wearing the same dress as Molly and decided to join her on about half of her walk down the aisle after the ceremony.
Besides calving & farrowing we are working on the fall catalog.
I found a sign I had to have.
"The Days are Long, but the Years are Short"
So, true.
Happy Fall!!
Posted by Jaime at 8:01 PM No comments: