Since it seems I skipped November!

Catalog from start to finish
Got started on new cattle record keeping system
We did our first sale with a computer program in the office - AWESOME!
SALE - Done
(Thanks to all the buyers, bidders & visitors)

It's always great to see everyone and wish there was more time to visit with people. (I guess that's why we go to other people's sales - when it is them who are busy!). Talking to a neighbor who had gone to one of her first cattle sales and said she didn't really know anyone. When we first moved home I only knew a few people, now Jeff doesn't want to sit with me because I just talk instead of pay attention to the sale - hum! 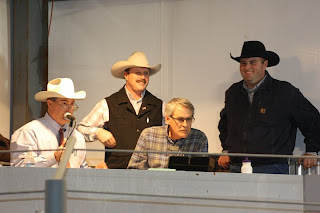 Thanks to Annie & Julie for taking pictures (saw the first batch last night) at the sale. Something that is hard to do and run between other jobs. They caught both Jeff's with a big smile before the sale. Anyone remember what joke Butch was telling? Poor Quinton is trying to figure out the computer system we threw at him for the first time.
Before the sale there were lots of time spent taking pictures of cattle. The kids helped take pictures of bred heifers on a beautiful fall day. 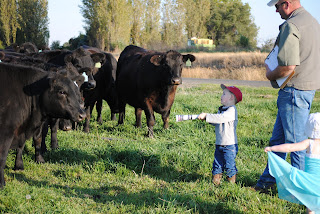 Notice Lila in her dress dancing and twirling in the corner. Trevor has his catalog (can't leave home without it) and is telling Jeff something about these girls. They all have a new home now.

We've also had 4 more litters of pigs, weaned & re-bred sows. Now I just need to find homes for all the little beggars. Spring born pigs are a hot commodity, unfortunately the litters born on the opposite season can be hard to get rid of - come on its fun keeping animals through the winter!

Fall cows are done calving and we've started synchronizing for fall breeding seasons. Keeping all those schedules in check. Blessed to have lots of crop aftermath thus far this season. Since it didn't freeze until the end of October crops had plenty of time to grow after their last harvest. If the snow stays away we are in good shape to sell more hay & feed less! There was actually haylage put up in Othello the first week of November this year - WOW!

Water's been off for a month and everything is drained (I think!). The guys kept going back to town to get more wire to build hot wire fence to surround all the fields before the ground freezes up hard.

The kids got all dressed up and Jeff carved pumpkins for Halloween. We had a Dorothy (second year running), a pig, and big surprise a cowboy! 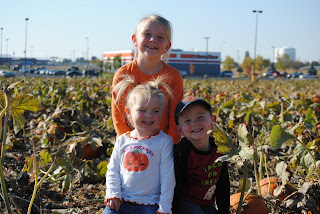 Pictures at the Sunny Farms pumpkin batch is pretty much the only semi-staged picture I've managed to get done every year. These kids change so much year to year.

Molly celebrated her 6th birthday (yes, we are in denial). Kindergarten is over 1/3 over. Dang.

Jeff got to attend the American Angus Convention in Louisville. Good experience even though he realized how long it had been since he was there with the WSU judging team.

I think I have most of my Christmas shopping done (helps when everyone gets part of a big present). There are three big boxes of trampoline that need to be put together though.

I found a sign that I had to have:

"The Days are Long. The Years are Short."

So true, so true.

Hope everyone was able to take a minute and reflect on what they are thankful for over Thanksgiving. We have so many blessings to count it seems nearly impossible (what a great thing to be able to say!)

Many blessings as we head into the Christmas Season!
Posted by Jaime at 7:56 AM No comments: