OK - so the custom stacker still has to come pick up the last 50 acres - but we're FINALLY done with hay! The guys are still helping the neighbor put up his hay - but ours is done. The last field wasn't so pretty (out our kitchen window, of course) but it's in the bale! And there hasn't been a calf born yet, so we finished hay before we started calving.

Besides calving most of the farm has been moving cows around to use grass that is left in one pasture and get off pastures that are done for the season. Especially since corn harvest is late (& stalks aren't available yet) keeping spring cows on grass meant some rearranging. The fall cows are getting ready to calf on orchard grass regrowth. They are pretty happy cows! 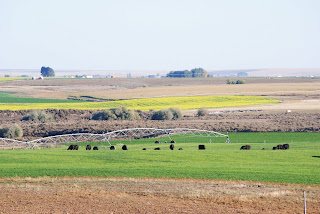 We're have also welcomed three litters of pigs in the last month and await two more. Baby pigs are awfully cute and the kids enjoy them. We also have a new kitty (thanks Amanda) that must think it is part human because the silly thing purrs while Lila carries it around by the neck. Lila makes of laugh with the cat. When we first got it she just followed it around and called it her version of "kitty". Then she only wanted to hold it when Molly had it wrapped in a blanket. Next was wanting the blanket-less kitty to sit on her "knee". Now she is the one that chases it down, packs it around, and doesn't want to share. Cute, cute, cute.

Molly was helping dad "drive" the pick-up the other day. We can't believe she's so big. 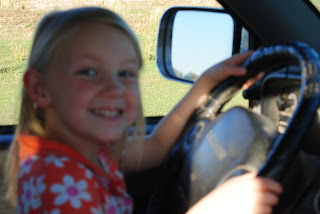 And lastly - some sunset pictures from the other night and a dahlia plant from my garden (still haven't frozen!). 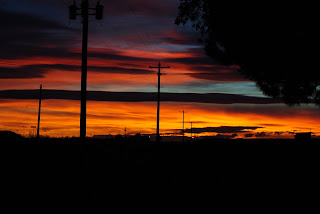 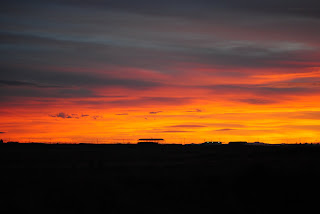 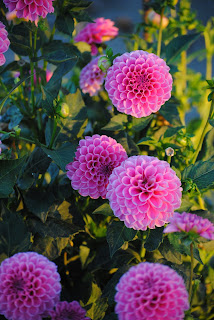