Obviously I am a few months behind!

Now that our pumpkins & tomatoes are dead and there is ice under the sprinklers it must be fall.  I promise summer kept us as crazy as ever.

Hay is all in the stacks.  The wheat is now new seeding alfalfa.  Corn should be harvested shortly; with the hard frost this week it is turning color before our eyes.  Some new circles are headed our way so the fall should bring lots of digging.  The unit we live on is included in the getting a circle for the first time fields.  I am very excited and Jeff should save a lot of time during the irrigation season. 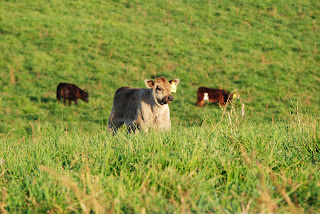 Cow chasing is in full swing!  The fall herd is better than 2/3's done calving.  Jeff bought a group of commercial fall bred cows & pairs.  They will be used as recips starting this coming year.  The cows have a fair amount of color (white faces, simmental, etc.) so there are some very cute babies in that group.  Their calves look good and for the most part they are calmer here than when the guys picked them up.  They aren't even too bothered with Jeff, Trev, Lila and I walking through them.


Our own cows have been moving right along.  Calving on green grass in dry weather makes for some spunky calves that are off to the races from day one.  The first calf heifers were even nice enough to give us a fair amount of heifer calves. 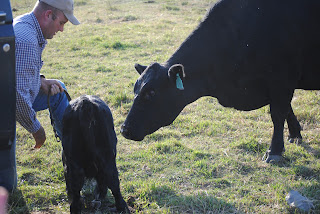 As of yesterday all of the 2012 calves are weaned.  Fall bulls are down at JR Ranch and off to a great start.  The last group of springs are participating in "fence-line weaning" and are already pretty calm.  The spring calves certainly enjoyed our easy winter last year and look really good.

Jeff spent some time in Oklahoma in September and got to see his new nephew (congrats Julie & Jimmy) and bought some cows at the Limestone dispersal.  As expected he selected some nice animals that are now residing in our corral.  With weaning and being in that special time where grass is slowing down and corn stalks aren't ready yet, we have cattle in every possible place (or at least it feels that way).  After some health issues with purchased cattle a few years back, we are very careful to keep new animals separate from our own until we are able to test and vaccinate up to our standards to hopefully prevent the problems we endured previously.

This coming weekend brings the WA Angus Evergreen Sale in Kennewick.  Jeff has put in lots of time and effort for this sale with the change in sale management.  Think I can bake another pie that raises over $800?

The Red, White & Black FRIDAY sale is also on the horizon.  Mark your calendars for November 23rd in Othello.  There will be about 50 bulls, at least 60 bred cows & heifers and show steers offered.  We helped semen test all the bulls for that sale this week and are working on catalog layout.  Always another project awaiting us!

On the home front still chasing kids although we are back in school mode. 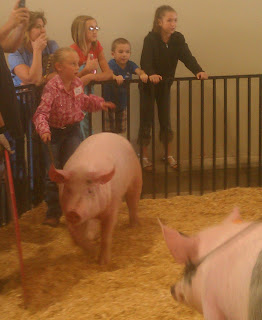 As I type Molly is writing her first set of fair support thank you notes!  Yep, she showed her first pig at the Interstate Fair.  Jeff and I are afraid to count how many more years of showing we will likely participate in - let's just say it is WAY longer than the length of our own "careers".  Being the parent of a first time, 6 year old showman is a whole new type of stress than being the showman yourself.  Molly did great and says she's ready to do it again.

Molly also has finished 6 weeks of first grade and already has a student of the month award to show for it!  Off and running.

This summer she had to eat her corn on the cob off the cob.  Four missing teeth (including both front teeth) made for some very cute smiles.  Looks like they will all be in before Christmas so she'll have to ask for something else from Santa!

Trevor & Lila continue to make us laugh, smile and GROW! Molly holds school for them every afternoon.  They still have their moments of being three-year-olds but tons of fun.  Trev is daddy's shadow.  Most mornings he races to get dressed so dad won't leave with out him.  If Jeff hasn't left yet he usually takes him back to do the chores here.  Lila is our little mother; babies aren't usually too far away.

Besides Julie's little boy we also welcomed two new nieces in September.  Congrats to Chris & Kelly & Tom & Annie!  They grow so fast.  We've all been to see Bryn and we can't quite believe our now big kids were ever that little.

Time for our annual pumpkin patch picture trip to Sunny Farms, about the only picture session I've managed to get done every year!
Posted by Jaime at 9:27 PM